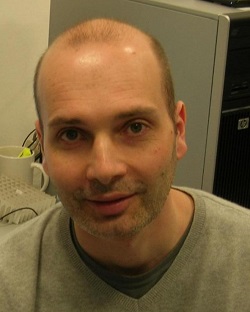 Andrea Raimondi obtained a Master degree in Biological Sciences in 2001 at Insubria University and a PhD degree in 2006 in Medical Pharmacology at the University of Milan. As a student he was trained in Electron Microscopy (EM) at the University of Milan, in the Neuroscience institute of the National Research Council (IN CNR). He continued his training in EM as a postdoctoral fellow at the Cell Biology Department of Yale University (2005-2009) and at the Neuroscience Department of Italian Institute of Technology (IIT) (2010-2012). Since 2012 he joined the ALEMBIC facility at San Raffaele Institute where is in charge of advance EM techniques such as EM tomography and CLEM.