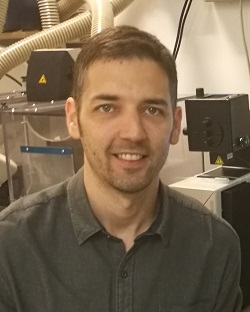 
After graduating in theoretical physics in Universidad Complutense (Madrid) in 2003, Samuel Zambrano started as a Ph.D. student in Miguel A.F. Sanjuán’s Nonlinear Dynamics, Chaos and Complex Systems Group in Universidad Rey Juan Carlos (Madrid), where he became assistant professor in 2008. There Zambrano developed different control techniques allowing one to keep the dynamics of a system in a desired “controlled” regime with a minimal intervention, which others have later applied to models of tumor development. They also proposed a technique to characterize time series based on “ordinal patterns” that other groups have used to analyze data from cardiac and EEG signals. He became soon aware on the potential applications of my theoretical background to the life sciences, and decided to focus on this. Thanks to the International Postdoctoral Program of San Raffaele, in 2011 Zambrano joined Alessandra Agresti’s group in Marco E. Bianchi’s lab, with the aim of understanding the role of the oscillatory dynamics of the transcription activator NF-κB. Since then, and in close collaboration with Alessandra and Marco, he tries to combine live cell imaging, mathematical modeling and microfluidics to understand the role of the dynamics of NF-κB in different contexts. Currently Zambrano is assistant professor of Physics at Università Vita-Salute San Raffaele, where he teaches Physics and Systems Biology to Biotechnology and MD students.

NF-κB is a transcription factor that plays a key role inflammatory response, coordinating the response of hundreds of genes in response to a variety of stimuli. Hence, its derangement can lead to a number of inflammation-related pathologies including cancer. NF-κB is also a paradigmatic example of a biological oscillator: in resting cells it is localized in the cytoplasm, but different external stimuli produce oscillations of its nuclear concentration with a period of 1.5 hours whose role that is still far from being completely understood.

In close collaboration with Alessandra Agresti and Marco E. Bianchi we combine live-cell imaging, automatic image analysis, microfluidics and mathematical modelling to gain insights on the role of NF-κB dynamics in healthy and pathological conditions.

Our main research lines are currently the following: