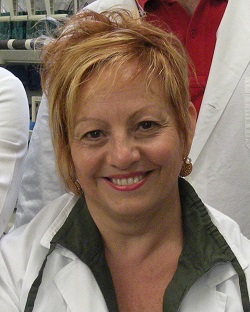 
Degree in Biological Science in 1982. Specialty in Immunology and Microbiology at University of Pavia, Italy in 1985. She carried out her training at the Department of Immunology and Microbiology, University of Veterinary Medicine, Milan, Italy till 1986. Then she moved to the Department of Biology and Genetic for Medical Science, University of Milan, Italy. In 1991 she moved to the Institute of Cancer Research, Chester Beatty Laboratories in London as a Visiting Scientist. Since November 1991 she has been working at IRCCS Ospedale San Raffaele, Milan and since 2002 she has been heading the Immunobiology of HIV Unit. In 2005 she moved to Duke University Medical Center, Durham, NC for a sabbatical year as Visiting Professor. On 2012 she had the National scientific qualification as Associate in Experimental Medicine, Pathophysiology and Clinical Pathology and on 2016 qualification as Full Professor in Applied Biology.

Among other grants she has been involved in international funded grants including FP7 from EC and from NIH. She coordinated two funded grants from Bill Gates Foundation. She is author of more than 100 original articles with H-index 32 (Scopus source). She is in the Editorial Boards of several scientific journals including OMICS groups, HINDAWI corporation and Frontiers in Immunology. She is ad hoc reviewer of several international journals including Blood, J Immunol, Nature Mucosal Immunol, AIDS, J Virol and Frontiers Immunol.