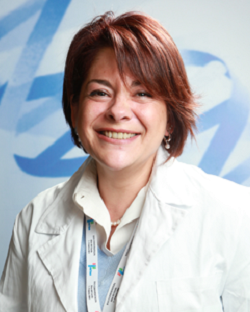 After the University degree obtained on March 1994 in Biology at University of Pavia, the main scientific interest of Dr D'Adamo was to identify and characterize new disease genes linked to the human X chromosome. From 1994 to 1999, she was at the CNR of Pavia working with Dr Toniolo on the identification of the genes responsible first for a rare infantile cardiomyopathy, the Barth syndrome, and then for X-linked Intellectual Disability. On 2000, she moved to the University of Zurich (Switzerland) in Prof Lipp Laboratory, where she learnt behavioural neuroscience. On 2004, she returned to Italy at IRCCS Ospedale San Raffaele in Milan, as Telethon Scientist and group leader of the Molecular Genetics of Intellectual Disabilities Unit. On 2014, Dr D'Adamo was permanently employed at Fondazione Centro San Raffaele, IRCCS Ospedale San Raffaele. Since 2004, Dr D'Adamo leed an independent group focusing on the further characterization of X-linked Intellectual Disability by using a combination of genetic, molecular, cellular and behavioral approaches.