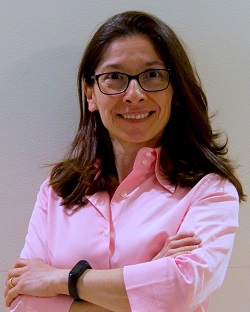 
Dr Annapaola Andolfo is the Facility Manager of ProMeFa (Proteomics and Metabolomics Facility) in the Center for Omics Sciences at IRCCS Ospedale San Raffaele.

She got her degree in Chemistry at the University of Naples in 1996, where she discussed a thesis focused on the structural characterization of a glycoprotein by mass spectrometry. In 1999, she obtained the European FEBS/EMBO research fellowship at the laboratories of the Department of Medical Biochemistry in Århus (Denmark) and of EMBL-Heidelberg in Germany, where she was applying 2D-electrophoresis and high sensitivity mass spectrometric methodologies to protein analysis. In 2005 she got her PhD in Cellular and Molecular Biology at the Open University (London) - San Raffaele Scientific Institute (Milan). At the end of 2005, she moved to IFOM, as a post-doc, to attend Prof Blasi’s lab, where she focussed her studies on the role of uPAR and its interactors in cancer. She intensely worked on the definition of uPAR cleavage sites and description of its homodimerization by both mass spectrometry and fluorescence techniques.

In 2008, Dr Andolfo joined the lab of Clinical proteomics headed by Prof. Ferrari, as laboratory coordinator, at IRCCS Ospedale San Raffaele. In 2010, she started the Protein Microsequencing Facility (ProMiFa), and, in 2014, she implemented a metabolomics platform to develop completely novel expertise within the IRCCS Ospedale San Raffaele. Taking advantage of the newly acquired mass spectrometry instrumentation and thanks to her long-lasting experience in mass spectrometry, she promoted the advancement of proteomic and metabolomic approaches, which are a beneficial resource for both local and extramural scientific community. She is also conducting several collaborations with physicians and scientists from other national and international research institutions.