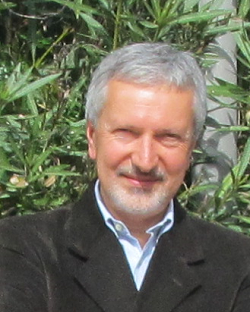 Angelo Corti is Full Professor of Biochemistry at the Università Vita-Salute San Raffaele, Director of the Division of Experimental Oncology, and the Head of the Tumor Biology and Vascular Targeting Unit of IRCCS Ospedale San Raffaele, Milan, Italy. He received his doctor degree in Biological Sciences, University of Milan, in 1978. In 1982 he has been Visiting Scientist at the NIH, Bethesda-USA, and than joined the Merrel-Dow Research Institute, Milan (1983-1988). Then, he served as the head of the Protein Biochemistry Unit at the Boheringer Res Center, Monza, Italy (1988-1989) and of the Biochemistry Research Unit at Tecnogen, Milan (1989-1994). Since 1994 he is the head of the Tumor Biology and Vascular Targeting Unit at IRCCS Ospedale San Raffaele, and since 2014, he serves as the Director of the Division of Exp Oncology (same Institute). In 2001-2009 he served as a consultant to Molmed for the clinical development of an anticancer drug developed by his group (NGR-TNF). He his teaching Biochemistry at the School of Biotechnology (since 2001) and Protein Biochemistry at the Intl School of Medicine (since 2010), Università Vita-Salute San raffaele.

His research interests are focused on the role of cytokines and chromogranin A in cancer and on the development of new therapeutic strategies for cancer patients. At present (2017) he is the author of 204 publications in peer-reviewed international scientific journals and inventor of 30 patent applications.