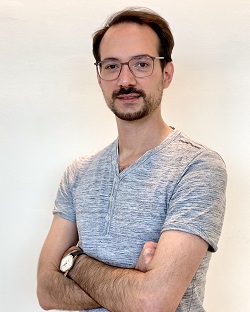 
By training, Daniel is a biologist who earned his MSc degree in Molecular Biology at the University of Vienna. During his master thesis in the laboratory of Alexander Stark at the IMP, he investigated the evolution of enhancer elements in flies, for which he had to acquire his first bioinformatic skills. These skills were further fostered during his PhD in the laboratory of Constance Ciaudo at ETH Zurich. Throughout this time, he was working on NGS data integration ([s]RNA-seq, ChIP-seq, Ribo-seq) to elucidate the role and contribution of sRNAs in mouse embryonic development.

Changing gears, he then continued as a bioinformatician at the laboratory of Ataman Sendoel at the University of Zurich to investigate squamous cell skin cancers. He established several bioinformatics pipelines for the analysis of RNA-seq (long and short read), Ribo-seq (standard + uORF identification) and scRNA-seq data. After a year, he returned to the academic path as a bioinformatics Postdoc fellow in the Cystic Kidney Disorder laboratory of Alessandra Boletta. He is currently establishing new scRNA-seq protocols and pipelines to analyse polycystic and cancerous kidney samples.