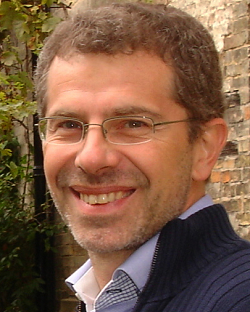 Luca Rampoldi is a scientist with recognised expertise in the field of molecular bases of genetic diseases. He trained as a geneticist, both as a bachelor (University of Milan) and as a Ph.D. student (University of Padua), spanning several areas, such as Quantitative Trait Loci and linkage mapping. He carried out his post-doctoral training in the laboratories of Prof. A. Monaco at the Wellcome Trust Centre for Human Genetics in Oxford (UK) (1999-2001) and of Prof. G. Casari at IRCCS Ospedale San Raffaele, Milan (2001-2003). As a postdoc, he broadened his expertise to disease gene identification and to functional studies of pathogenic mechanisms through the use of in vivo and in vitro models. He established his research group at IRCCS Ospedale San Raffaele in 2004, thanks to two consecutive Telethon Career Awards.

His group has been actively working at understanding the bases of uromodulin-associated kidney disease (ADTKD-UMOD), and more generally the role of uromodulin in health and disease, through the use of a wide range of approaches, ranging from human genetics, to cell and mouse models. Results obtained from these studies generated seminal papers that significantly contributed to current understanding of ADTKD-UMOD pathogenesis and that uncovered the role of uromodulin beyond Mendelian disease, as a risk factor for common disorders as hypertension and chronic kidney disease.