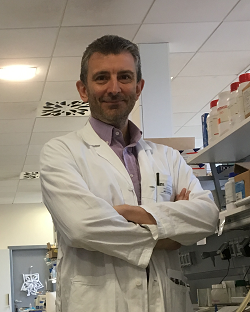 
Dr. Massimo Degano was born in Udine (Italy), and graduated in Chemistry at the University of Padua in 1992 where he learned with great detail the technique of X-ray crystallography thanks to the mentoring of professors Mario Mammi and Giuseppe Zanotti.

He immediately moved to New York at the Albert Einstein College of Medicine where he joined the Department of Biochemistry as a post- doctoral research associate under the supervision of Vern Schramm and James Sacchettini, working on the structure of enzymes that are targets for the design of anti-protozoan drugs. In 1996 he moved to the Scripps Research Institute in La Jolla to pursue a second post-doctoral training in structural immunology in the lab of Ian A. Wilson. Here, he was part of the effort that led to the first structure of an αβ T cell receptor, the structures of several complexes between TCR, MHC and peptide antigens, as well as non-classical MHC-like molecules. In 1999 he joined the Italian Synchrotron Source ELETTRA in Trieste, where he headed the Crystallography and Structural Biology area. In 2001 he joined IRCCS Ospedale San Raffaele, where he heads the Biocrystallography Unit and has been teaching chemistry and biochemistry at Università Vita-Salute San Raffaele.

He coauthored 49 peer-reviewed publications with an H-index of 25.