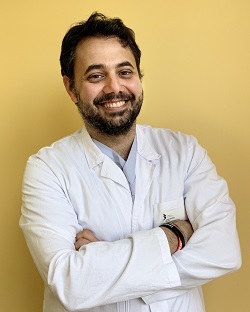 Antonio received his doctor degree in Medical Biotechnology in 2009 and he obtained a Ph.D. in Experimental surgery and Microsurgery in 2014, both at University of Pavia. During his first research activity, he discovered the role of the CXCR1/2 pathway in the islet function and engraftment both in islet transplantation and Type 1 diabetic models. This opened a new line of clinical research on the immunomodulation of the islet microenvironment.

Since 2016, Antonio focused his research on regenerative medicine and imported to San Raffaele the knowledge of multiple organ engineering and bioreactor customization that he learned at Harald Ott laboratory of Organ Engineering at Harvard Stem Cell Institute, Boston (USA). Organ Engineering could both reduce the general organ demand and model diseases ex vivo and is becoming a hot topic to close the gap between in vitro culture and expensive in vivo research.

Since November 2019, Antonio is Project Leader at IRCCS Ospedale San Raffaele at the Diabetes Research Institute. The aim of his team is to study and characterize the interaction and engraftment between pancreatic islets/endothelial cells and organ microenvironment, with a dedicated focus on cell to extracellular matrix interaction in physio/patological landscape. These findings will open the possibility to generate new concept of Vascularized Endocrine Organ for the treatment of Type 1 Diabetes. His research activity is supported by JDRF and the Italian Ministry of Health