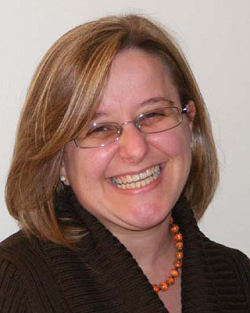 Carla Taveggia graduated in Biology at the University of Milan and obtained her Ph.D. in Molecular and Cellular Biology at the Open University London, UK. She then moved in New York, US at the NYU Medical Center, where she investigated the role of the axonal molecules controlling myelination. Her studies demonstrated that Neuregulin1 type III is an essential instructive signal for PNS myelination as its axonal dosage regulates the amount of myelin produced. During these studies she was supported by a post-doctoral fellowship from the US National Multiple Sclerosis Society.

In 2007 she was awarded a Transition Career Award from Federazione Italiana Sclerosi Multipla. She thus moved back to Italy in 2008, to establish her research group at IRCCS Ospedale San Raffaele in Milan, where she has been since then and where, since 2017, she is deputy director of the Division of Neuroscience. In San Raffaele she continued to study the mechanisms controlling neuronal glial communication and identified the secretase TACE as a post-transcriptional regulator of Neuregulin1 cleavage and activity. More recently, her laboratory identified in Prostaglandin D2 synthase and its signaling mechanism a novel pathway regulating PNS myelin formation and maintenance.

She has been invited to present her work at single Institution as well as in several international meetings, among which the Euroglia Meeting; the Myelin Gordon Research Conference; and the 2010 Myelin Meeting at Les Treilles Fondation featuring the principal scientists working on myelination.