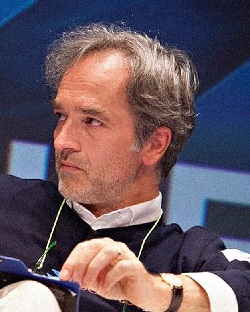 
Gianvito Martino (Bergamo, 1962) received his Medical Degree in 1987 from the Univ. of Pavia (Italy) and completed his residency in Neurology in 1991. In 1990, he was a Visiting Scientist at the Dept. of Neurology of the Karolinska Institute (Sweden) and, from 1991 to 1992, he held the position of Research Associate at the Dept. of Neurology of the Univ. of Chicago (Chicago, IL, USA). From 1992 to 2008, he worked first as Senior Scientist and then as Director of the Neuroimmunology Unit of the San Raffaele Scientific Inst. in Milan (Italy) where he acted also as Director of the Neuroscience Division (2008-2016). He is Scientific Director of the San Raffaele Scientific Institute since 2016.

He is full professor of Experimental Biology and Vice Rector for Research and Third Mission at the San Raffaele Vita-Salute Univ. in Milan. He was appointed Honorary Professor at Queen Mary Univ. of London from 2009 to 2017. He has been the Scientific Secretary (1998-2003) and the President (2009-2012) of the Italian Neuroimmunology Society (AINI).

He is the founder and the Scientific Coordinator of the European School of Neuroimmunology (ESNI) and of the Global Schools of Neuroimmunology (GSNI). Within the International Society for Neuroimmunology (ISNI), he served as advisory board member (2002-2010), Vice President (2010-2012) and President (2012-2014). He has been a member of the scientific committee and reviewing panel of ECTRIMS, FISM, MSIF, INSERM; UK MS Society, Wellcome Trust's Peer Review College. From 2017 to 2019 he has been the President of the scientific council of the Fondazione Regionale per la Ricerca Biomedica (FRRB). From 2015 he serves as Panel Member of the European Research Council (ERC) and from 2020 of the NEURON-ERANET. He has co-authored more than 250 original articles and book chapters. His scientific interests range from the elucidation of the pathogenic mechanisms of immune-mediated central nervous system disorders to the development of gene and stem cell-based therapies for the treatment of these disorders.