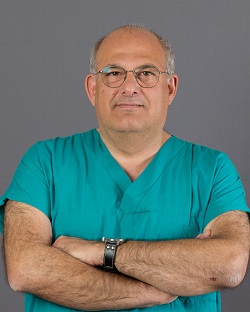 His research activity has allowed the transplantation from partially compatible haploidentical donor as a therapeutic option in high risk oncohaematological diseases. Since 1996, Professor Ciceri has been the Principal Investigator in the clinical development of advanced cell therapy, gene therapy and regenerative medicine programs in both oncological and non-oncological diseases. Among these, he has contributed to the development of the first advanced cell therapy for blood cancer, with the use of the suicide gene HSV-TK for the control of donor lymphocytes, and the development of gene therapies for the treatment of primitive immunodeficiencies, metabolic diseases and beta-thalassemia.

Professor Fabio Ciceri is member of several organizations, such as the Italian Society of Hematology (SIE), the Italian Bone Marrow Transplantation Group (GITMO), of which he is the current president, the Lombard Hematological Network (REL), the Italian Group of Adult Hematological Diseases (GIMEMA),  the European Blood and Marrow Transplantation Group (EBMTG), the European Hematology Association (EHA), the International Network of Cancer Trial Research (INCTR), the International Cardio Oncology Society (ICOS) and the European Technology Platform for Nanomedicine (ETPN).