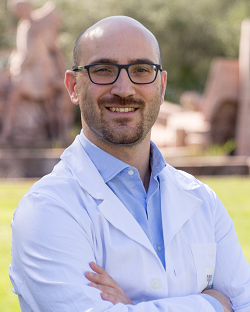 
Renato Ostuni obtained a PhD in Immunology with Francesca Granucci and Ivan Zanoni at the University of Milano-Bicocca. Here, he contributed to the discovery of CD14 as a key regulator of biochemical and cell biological responses of inflammatory cells to the bacterial molecule LPS (Nature 2009, Cell 2011, JCI 2012).

He did postdoctoral work at the European Institute of Oncology (IEO) with Gioacchino Natoli, where he discovered latent enhancers, a class of regulatory elements controlling short-term transcriptional and epigenetic immune memory in activated macrophages (Cell 2013). Since 2015, he is Group Leader at the San Raffaele Telethon Institute for Gene Therapy (SR-Tiget), where he directs a team of 10 people working on the genomic control of macrophage activation (Nature Immunology, 2017) and on the development of the innate immune system in humans.

As of 2018, Renato Ostuni has published >20 articles in peer-reviewed journals, including papers as first/last author in Cell, Nature and Nature Immunology. Overall, his work has been cited > 2,000 times, with an H-index of 18 and IF > 250.

He has received several prizes and awards, including an ERC Starting Grant in 2017. He is actively involved in public outreach and research dissemination projects. His research activity is supported by the Telethon Foundation, the EU (ERC and ERA-NET), Cariplo Foundation, AIRC and the Italian Ministry of Health.