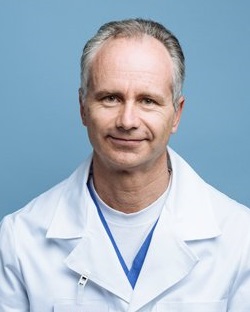 He initially focused his research studying diseases of the coagulation and HIV infection. His research on hematopoietic stem cells led to the discovery of the first chemokine produced by bone marrow cells inducing migration of human hematopoietic stem cells. His current research is focused on pediatric hematology and immunology and specifically on primary immunodeficiencies, genetic diseases of the immune system. He pioneered the successful gene therapy clinical trial for SCID patients that lack adenosine deaminase (ADA), a fatal disorder of purine metabolism and immunodeficiency. This clinical trial, now completed, introduced a conditioning regimen to favor the engraftment of gene corrected cells and is considered to be among the most important clinical result of gene therapy for genetic diseases. Gene therapy for ADA SCID has been designated as Orphan Drug in Europe and USA. His most recent research with hematopoietic stem cells transduced with lentiviral vectors led to the successful application of therapy for another primary immunodeficiency, Wiskott-Aldrich syndrome.

2014 National Award “Cultura della Solidarietà” for an outstanding activity in science, which has granted so many benefits to human being
2010 Award from AACS of Rome – Special Mention “Heart of Rome”
2010 XVIIIth ESGCT Meeting: Award for an outstanding career and pioneering contributions to the field
2009 HSR Scientific Retreat: Best paper award in translational medicine
2004 JOUAN Biotherapy Award for the best clinical research project
2003 Young Investigator Award, American Society of Gene Therapy
2002 Top abstract presented at the Plenary Session of the American Society of Gene Therapy
1996 Travel Award from the American Society of Hematology for presenting an oral communication at the ASH annual meeting in San Diego
1993 Winner of a fellowship from the Italian Ministry of Health for scientists working on AIDS research in a foreign country
1991 Award from the Istituto Pasteur Fondazione Cenci Bolognetti, University of Rome “La Sapienza”, for the best experimental thesis on basic sciences in year
1989 Award from the University of Rome and the Fondazione Sigma Tau for the best research work on basic sciences