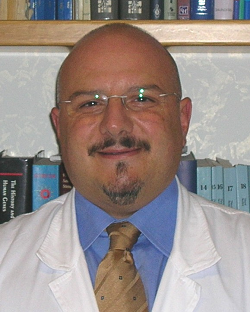 
Italian physician born in Chacabuco (Buenos Aires), Argentina on August 22, 1962. Graduated in Medicine and Surgery at the University of Buenos Aires (1985); moved to Italy in 1989, obtained the second degree in Medicine and Surgery at the University of Parma (1992) and the second specialization in Medical Oncology at the University of Milan (2005). His scientific skills include laboratory, translationial and clinical research studies on lymphomas at IRCCS Ospedale San Raffaele, where he is the head of the Lymphoma Unit and Contract Professor of Oncology at Università Vita-Salute San Raffaele.

He has conducted numerous studies on different extranodal lymphomas and is an indisputable authority in the area of brain lymphoma, having defined the treatment guidelines applied in all countries. His studies have the merit of seeking tumor causes and using them as therapeutic targets, particularly in the field of lymphomas associated with infectious agents. For example, it has demonstrated association between orbital lymphoma and Chlamydia psittaci infection, leading to the use of antibiotics in place of conventional therapies.

He has been a founder of the International Extranodal Lymphoma Study Group and the Italian Lymphoma Foundation. He is a member of numerous international scientific societies and is faculty of the European School of Oncology. He is author of numerous scientific articles and chapters of books in English, Italian and Spanish.