Testicular microbiome: a step forward in the understanding of azoospermia

Azoospermia is a condition in which there is a total absence of sperm in the semen and affects one man out of 100. In most cases the cause behind it remains unknown and still no risk factors or pathophysiological pathways have been found out. Understanding the biological mechanism of idiopathic azoospermia is extremely important, because recent data suggest that men’s infertility is linked with a poor general health condition and early aging. 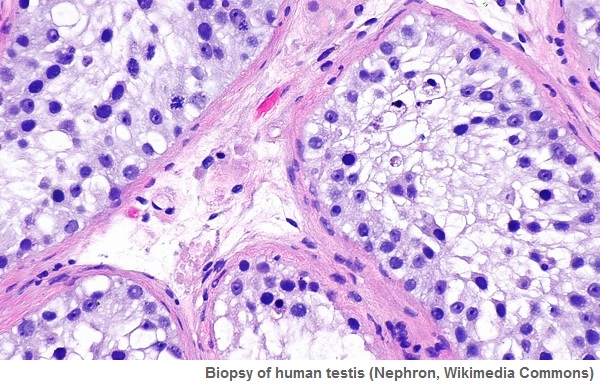 A research study published recently on Human Reproduction – an Oxford University Press journal – suggests that testicles are not microbiologically sterile, contrary to what scientists previously thought. Moreover these novel findings establish a possible link between azoospermia and abnormal bacterial profiles in the testicular tissue. The discovery was made by a group of researchers of URI, the Urological Research Institute of IRCCS Ospedale San Raffaele, Milan, in collaboration with the Laboratory of Microbiology and Virology of the same academic hospital. Researchers used a very sensitive technique to amplify the bacterial DNA in order to prove the presence of bacteria in the testicular tissues. If the results are confirmed, they might pave the way to future translational therapies for male-factor infertility based on the reconstitution of a proper testicular niche.

The group of researchers led by dr Massimo Alfano investigated the bacterial population in the testicular tissue of 15 men, including some affected with idiopathic azoospermia and some healthy individuals with normal spermatogenesis. The study is quite innovative because the testes are among the few organs which are still not microbiologically characterized. Although the data must be further expanded and confirmed, the microbiome analysis already showed a significant difference between the two groups, i.e. specimens from men with normal spermatogenesis host a smaller yet more diversified amount of bacteria belonging to four of the principal bacterial phylum, whilst azoospermic men host more and less biodiverse bacteria, lacking both the phylum of Bacteroidetes and of Proteobacteria.

“This is the first evidence proving that the testicular microenvironment is not microbiologically sterile. Indeed, there are bacteria living in the testis and we can speculate that they have a relevant role in a variety of physiological processes, as it happens in all other human tissues and systems that have been studied so far” explains Andrea Salonia, director of the Urological Research Institute. “It is a strong evidence, since we collected tissues through microsurgery in a clean and sterile environment, thus avoiding any possible contamination.”

If confirmed and expanded, these results could pave the way to future translational therapies and to new clinical biomarkers to better address azoospermia types and predict therapeutic outcomes in infertile men.